A female superhero and a member of the Justice League.

Zatanna is shown as a fairly tall adult woman with long black hair. This version of her always wears the costume of a stage magician (and partly the glamorous assistant) but her top hat is bigger than usual and has a flat brim. She is mature and dependable as a person.

Her power is the ability to perform magic which she often does with the wave of her wand while pronouncing the words of a spell backwards and is accompanied by bright lights and twinkling stars. She does not always need those things to do magic though. Her wand can also be used as a weapon to shoot bolts of magical energy.

Zatanna makes use of other stage magic props in combat. She can pull out a line of knotted silks to ensnare a foe or turn playing cards and linking rings into deadly sharp weapons to throw. A deck of charmed cards can be flicked at a wraith to destroy it.

Under cover of a large silk, she can disappear and later reappear from under it after it has floated elsewhere. She can do more than pull rabbits from her hat (they are not very useful anyway) as the hat is said to be a "mystic portal to other dimensions." Perhaps because of this, a plant-like monster called Audrey can be conjured from it to assist in battle.

During combat she can be very acrobatic, particularly when she is not wearing her hat.

Zatanna is sometimes seen to operate with Constantine as though they are a team, and she appears to be familiar with Brother Night and Ember as enemies. She has a magic stage act under her usual name of Zatanna. Nothing is known of her personal relationships. 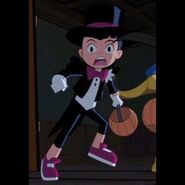