A major female superhero, and member of the Justice League.

Wonder Woman is one of the main characters in the show and appears in half of the episodes.

She is depicted as a slim, fair-skinned, adult woman with black hair but, although fairly tall, she does not reach the height of Batman or Superman even in her heels. Her costume consists of a red bodice, blue Greek warrior's skirt of dangling strips, and red thigh-length boots which all leaves her shoulders, back, upper arms, and upper thighs bare. There is a gold eagle decoration across her chest and a gold 'w' decoration around her waist, and across her brow she wears a golden tiara with a star emblem and has the front of her hair swept over it to the right.

Wonder Woman is an Amazon warrior and occasionally reminds us of her prowess and her need for daily training. By nature she is a bit hard-headed and, although she has a strong sense of justice, is less tolerant than Superman towards captured criminals. Perhaps to explain this, she tells us that as a child she did not have toys and had to fight a cyclops instead. She can be romantic though.

This version of Wonder Woman can fly and although her invisible jet is mentioned at least twice she does not use it. When traveling through space, she has to go by vehicle as she is presumably not fast enough to get anywhere on her own, but she is able to survive in the vacuum outside. Her physical strength is considerable but is finite: in one scene she is unable to halt the gradual fall of Justice One. She is very adept in close combat, being able to punch with great force and can also absorb much punishment even from Kryptonian opponents. Her speed is only noticeable when she is intercepting bullets, and her senses are nothing unusual.

She does not have any unique weaknesses but does have general vulnerability, i.e. her body is not bullet proof.

Wonder Woman makes considerable use of equipment in combat. Her traditional pair of bracelets have become extended into pieces of armor that cover the lower arm and back of the hand. They are used in defense to deflect or absorb bullets or ray blasts, and she never fails in this.

In offense, she frequently makes use of sword and shield or just sword on its own, and these are slung across her back when not in use. The sword is long with jagged edges, and both it and the shield appear to be indestructible.

Her most distinctive weapon is the Lasso of Truth which is normally coiled at her right hip. This can be used to trip or throw a foe and also to ensnare an opponent in an unbreakable grip - so long as she does not let go of it. Also, a person with the power of intangibility (like the Martian Manhunter) can break free. When Wonder Woman activates the lasso and it glows, anyone caught in its noose is compelled to tell the truth.

A wily opponent can cause her to become entangled in her own lasso.

We occasionally see Wonder Woman present on Paradise Island perhaps to see her mother, Queen Hippolyta, and the Amazons she grew up with. She also maintains contact with the gods of Olympus who can provide her with useful information, and they can visit her too. Given her non-Amazonian abilities - like flight - and the offer to her to become a goddess, this would suggest she is at least part god herself.

In her everyday life she adopts a secret identity: that of Diana Prince - with or without glasses.

In this guise she tells us that Steve Trevor (not seen in the show) ignores her and is smitten with Wonder Woman. Perhaps because of this, in one episode we see she has transferred her affections to Clark Kent, and he to her, and this continues between their superhero identities. However, although they are on first name terms in a few episodes, in most their relationship is seen to be purely professional with no suggestion of romance. 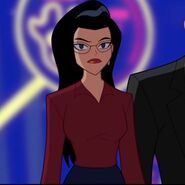 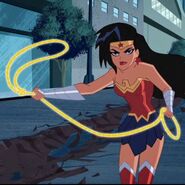 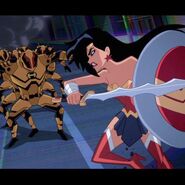 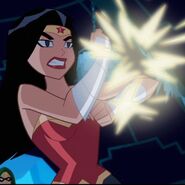 Add a photo to this gallery
Retrieved from "https://justice-league-action.fandom.com/wiki/Wonder_Woman?oldid=20824"
Community content is available under CC-BY-SA unless otherwise noted.