Under a Red Sun

"Time Share" is the ninth episode of Justice League Action.

Chronos intends to travel back in time to eliminate Batman from history, but the Justice League are on to him.

Batman and Blue Beetle (an inexperienced, teenage superhero) pursue Chronos who appears to have just stolen a small glowing device from a company owned by Bruce Wayne. Chronos shoots his time bombs at his antagonists but they hit bystanders who freeze in time for a few seconds. Blue Beetle flies ahead of Batman and obstructs him earning scorn for his mistake, but they follow Chronos to his hideout. There they find newspaper cuttings on the wall concerning Batman's first case when he took down gangster Carmine Falcone.

Elsewhere in the building Chronos uses the glowing device to charge his time-travelling gauntlet before Batman confronts him. He runs away and Blue Beetle blunders again in trying to stop him. Chronos opens a time portal and goes through but Batman and Blue Beetle are also able to enter. They come out at a time when the building appears newer.

Moving outside Batman recognises the scene and realises Chronos has come back to the time of his first case in order to change events and erase the Batman from history. The two superheroes see the earlier Batman go into the warehouse for his confrontation with Falcone and follow. Inside they see Chronos high above the scene where the early Batman is surrounded by gangsters who are about to open fire. Blue Beetle impetuously attacks and knocks Chronos' time bombs so that they hit everyone below and freeze them thus threatening the proper time line.

Chronos is able to dodge Batman's punches because he can always see one second ahead. Batman drops a smoke bomb and hits Chronos suddenly from the haze. Meanwhile Blue Beetle makes amends for his mistakes and adjusts the positions of the frozen gangsters just before they wake and open fire. The early Batman is able to deal with them. However, the scene is still not right as Falcone is missing so Batman finds him and knocks him out so that the early Batman can find him.

Batman and Blue Beetle, with Chronos, return to the present day where Blue Beetle is finally acknowledged by Batman for his contribution. 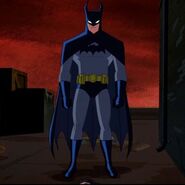 The early Batman.
Add a photo to this gallery
Retrieved from "https://justice-league-action.fandom.com/wiki/Time_Share?oldid=22966"
Community content is available under CC-BY-SA unless otherwise noted.