A major superhero, and member of the Justice League.

Superman is one of the main characters in the show and appears in two-thirds of the episodes. He is tall with dark hair and is the most heavily built of the superheroes. His build may indicate that he is middle-aged but his voice would suggest that he is younger. As a person, Superman is mild mannered, friendly, agreeable and is unconvincing when he tries to be nasty. His costume is the traditional blue one with red boots, yellow belt, large red cape, and 's' symbol across the chest but the red 'briefs' have gone.

We are told that Superman's home world was the planet Krypton (which has been destroyed) but, now that he now lives on Earth, the effect of the rays of the yellow Sun (as opposed to those of the red sun of Krypton) have greatly amplified his physical powers. He appears to be the strongest of the superheroes, though we do not see him moving anything as heavy as a planet, and is also the toughest and able to win a fist fight with the god-like Darkseid. An unusual type of blow is delivered when he claps his hands together to send a foe reeling. His body is impervious to bullets and is invulnerable to most other harms. His speed is equal to that of The Flash though the latter is more subtle in its use. His lungs enable him to blow with immense force, and the sheer cooling draft can cause things to freeze. He can also suck a large volume of gas into his lungs and blow it out again.

Superman's senses are also greatly enhanced. His hearing is acute and can detect very quiet or very distant sounds even over the top of noise. He can see things at immense distances and also down to microscopic levels, as well as being able to see through solid objects. The pupils of his eyes turn blue when he does this. His vision is so intense that he can emit red heat beams from his eyes that can melt the toughest substances, and frequently uses this ability.

More unusual are the abilities to fly through the air and to travel through space, and in the latter case, Superman is not affected by the lack of air. He can travel to other star systems in a surprisingly short time.

All of this is achieved by storing the Sun's yellow energy in his body, and, in any situation where this is not available, his super energy will still be effective for a while until it runs out.

For someone with such superhuman abilities, Superman has a surprising number of vulnerabilities. He is incapacitated by exposure to the green variety of kryptonite (the radioactive remains of Krypton) of which there appears to be a never-ending supply to be used by his enemies. The other, rarer varieties of this substance have more unusual effects. A lead-lined suit is available for him to use which can block kryptonite rays. When exposed to the rays of a red sun, Superman loses his powers - but not immediately - and weapons based on this can inflict injury upon him. He can be infected by microscopic nano-bots which can drain his super energy and threaten his life. Mind control (like that practised by the Martian Manhunter) can be used, for instance, to make him lose consciousness, and like most non-supernatural beings he is helpless against magic. He has difficulty getting the better of other super-powered Kryptonians and can be punched and knocked out by an equally powerful opponent like Mongul.

Superman's original Kryptonian name was Kal El but, when he came to Earth, he adopted the family name of his foster parents (both of them are still living) to become Clark Kent and grew up on their farm near Smallville in Kansas. We occasionally see him in this everyday identity and he currently works in Metropolis for the Daily Planet newspaper alongside Lois Lane, Jimmy Olsen, and others.

In his superhero guise, he makes use of a private retreat at the North Pole, the Fortress of Solitude. Of his original Kryptonian family, only his cousin Supergirl survives and he still has his pet, Krypto. The people of the bottled city of Kandor are his fellow Kryptonians as are the three criminals (Zod, Faora, Quex) imprisoned in the Phantom Zone.

Neither Superman nor Clark Kent shows any romantic interest in Lois Lane. Instead his affections are for Wonder Woman (and Diana Prince) though this is only seen in a few episodes. She can address him as "Clark" or "Kal". 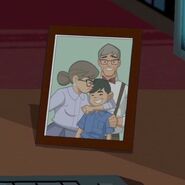 The Kent family with a young Clark.
Community content is available under CC-BY-SA unless otherwise noted.
Advertisement