A female superhero and member of the Justice League.

Supergirl has the appearance of a wide-eyed human teenager with blonde hair and wears her traditional costume except that it has thigh-high boots and a pleated skirt. As a person, she is youthful, responsible, and shows much affection for her cousin Superman.

It is obvious that her powers (flight, super-strength, etc.) are identical to those of Superman, and, in an alternate timeline story where the two are hostile, neither can gain an advantage in a prolonged fight. In that story we see a vain version of her wearing a slightly different costume.

Supergirl is said to be a survivor of the destroyed planet Krypton (which makes her an alien) and that her real name is Kara Zor-El. She is familiar with her cousin Superman whom she is seen visiting on the Kent Farm and she keeps Streaky the Super-Cat as her pet. Superman tells us that she is older than him - which may be due to something that happened during her journey from Krypton, either as a time-traveling anomaly or as her having been in suspended animation.

She can also visit Paradise Island where she practises sword fighting with Wonder Woman and, unlike male members of the Justice League, she is welcome there. 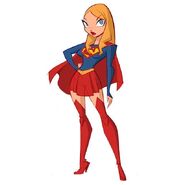