View source
watch 01:36
We're Getting Mutants in the MCU - The Loop
Do you like this video?
Play Sound

A female superhero, and member of the Justice League.

Stargirl is depicted as a teenage girl with blue eyes and long blonde hair reaching to her ankles, and is seen to be diminutive in stature when standing alongside adult characters. She is dressed in her usual dark blue body suit (but it is not open at the waist) that is decorated with large white stars, with the gloves, belt, and boots in a burgundy color. There are no stars on the back of her costume. Stargirl is inexperienced and liable to make errors but makes up for it with youthful enthusiasm.

Her powers come from a golden staff - called the Cosmic Staff elsewhere - that she brandishes in her gloved hands. At the top end, it has a head with a point, an edge, and a hook like a medieval polearm, and at the bottom is a pointed knob. In the middle is a control panel that the superheroine is rarely seen to touch.

Stargirl only has to grip it to be able to fly through the air, and the staff can float on its own allowing the superheroine to sit on it. However, when travelling at speed, she rides it like an aerial surfboard.

It can be used to just hit or trip a foe but, when activated, the staff has a translucent white sphere around its head and in this state it can be used offensively by projecting ray blasts and defensively by sweeping aside gun shots. The staff can surround Stargirl with a defensive bubble and this can also be projected outwards to surround someone or something and levitate them/it regardless of weight. Stargirl can use this to pick up a heavy object - like a construction vehicle - and hurl it through the air.

The staff can fold to be carried (and hidden) in a bag.

The origin of the staff's powers is not mentioned but the word "star" (and "cosmic") suggests that it is something from outside of the Earth. Also, her prominent belt - called the Cosmic Converter Belt elsewhere - ought to give her enhanced speed and strength, but it is not said or seen to have any function here.

On two occasions we see that Stargirl has a romantic interest in fellow teenager Firestorm which at least results in a kiss. She also flirts with Constantine in passing. In her everyday life we see her as Courtney (with her hair tied back) when she does a stint of babysitting and where she is seen to be both strict and caring with children.

Superman confirms that Stargirl is a member of the Justice League along with Firestorm and Blue Beetle. 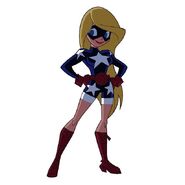 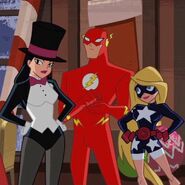