Kryptonite is a substance that is made of the radioactive remains of the planet Krypton and is the only substance that can harm Kryptonians like Superman. While its most common variety is a green glowing rock, Kryptonite can come in many forms that affects Kryptonians differently. 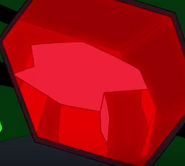 Pink Kryptonite
Add a photo to this gallery

Retrieved from "https://justice-league-action.fandom.com/wiki/Kryptonite?oldid=19811"
Community content is available under CC-BY-SA unless otherwise noted.