The Justice League is an organization to which almost all of the superheroes seen in Justice League Action belong. Their purpose is to campaign the cause of truth and justice. In doing this, they come into conflict with the many villains across the show.

Traditionally, the Justice League's members (sometimes called "Leaguers") come together to oppose some threat that they would not be able to handle individually, e.g. a threat to the whole Earth, the galaxy or even the entire universe. To achieve this they make use of their super-powers and guile, and any weaknesses they may have individually can be compensated for by teamwork. The members, including the animal ones, carry small signaling devices which are used to alert the other members so that they can meet at the designated assembly place, the Watchtower. There, they have instruments to locate threats on Earth or in space so that they can then move to deal with them, making use of the League's vehicles if necessary.

In episode 38, Forget Me Not, we are shown a display of twenty-four superheroes who are on call from the Watchtower:

From left to right they are:

We see a similar gathering for a Christmas party in episode 46, Party Animal, except that it includes Black Canary, Jason Blood (Etrigan), Mister Terrific and Red Tornado.

In the early episodes, the League is still based in the Hall of Justice as it had been in previous cartoon series. It is replaced by the new Watchtower which is built at the end of the fourth episode at the top of a mountain.

The main transport used by the League is the aircraft/spacecraft Justice One. It is supplemented by the flying fighter Justice Two and the smaller vehicles, Justice Three and Justice Four, that specialize in land and water movement respectively. The Batplane can also be based in the Watchtower. 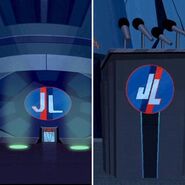 The 'JL' symbol.
Community content is available under CC-BY-SA unless otherwise noted.