A magical superhero, and member of the Justice League.

John Constantine (or just Constantine) is shown as a fairly tall adult male with fair hair. He is dressed as usual in his tan raincoat but, although Stargirl calls him a "hobo", he looks relatively clean and tidy here. He talks loudly in a Cockney accent and is good humored, and the only hint that he might be a bit odd are his carnal desires of a supernatural kind. He is never seen to smoke or drink as elsewhere but can suck on a popsicle/lollipop instead.

His power is his mastery of magic due to his knowledge of the occult, and he can cast spells by waving his hands which emit light as he does so. Some examples of it are: when he changes the appearance of the Justice League members in order to disguise them, and when he casually opens a travel portal with a wave of his hand.

However, in combat, he makes use of arcane artefacts that he carries in his coat. For instance, he can throw a handful of specially marked marbles in the air and project them like bullets to attempt to break a magical barrier. Similarly, he can pull a Japanese scroll from his coat and eject a warrior spirit from it to deal with magical opposition.

Constantine carries a set of keys on a large ring with which he can attempt to open supernatural locks, and he also has a hip flask which presumably contains holy water to splash on evil foes. In one story where he has been transformed into a ten-year-old, he uses chains with lucky horseshoes at the ends to throw to entangle the legs of opponents.

He is seen to be the current resident of the House of Mystery even though it still contains its monsters. Nothing else is known of his life other than that he may occasionally form an evil-fighting team with Zatanna. 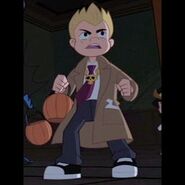