An organisation of superheroes that has Green Lantern as a member.

The Green Lantern Corps does not feature prominently in the show but it is mentioned at least twice, and Green Lantern (Hal Jordan) must be a member even though he is not said to be, nor is he seen collaborating with other members.

There are also a few characters that are shown briefly or just mentioned that must be in the Corps and can be identified from elsewhere. They are Kilowog (seen in one of Space Cabbie's selfies), G'nort (has a dog-like face), Boodikka (the only one said to be a member), and Guy Gardner (an Earth-based alternative to Hal Jordan). 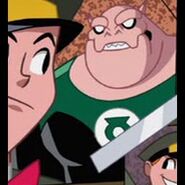 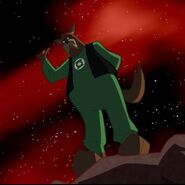 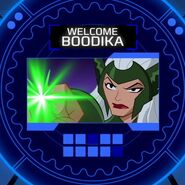 Boodikka
Add a photo to this gallery
Retrieved from "https://justice-league-action.fandom.com/wiki/Green_Lantern_Corps?oldid=21806"
Community content is available under CC-BY-SA unless otherwise noted.