A superhero, and member of the Justice League.

Flash is shown as a man of medium height and medium build, and wears his usual red costume decorated with yellow lightning strokes but the decorations on his ears and the tops of his boots are more like small wings. In character, he is jovial and friendly.

His power is his ability to move with super-speed which, he tells us, he has obtained from the "speed force" that is "found between dimensions." As he accelerates away, streaks of lightning can sometimes be seen streaming from the back of his head and body but not otherwise when he is running. This power can be used, for instance, to search through the streets of a city in a hurry or to quickly check on all the inmates in a prison. In combat, he relies on his speed to catch opponents unawares and then bombard them with blows in a blur, and can run and jump into the air against flying foes.

His weakness is that of general vulnerability but he can always use his speed to move out of harms way. Another skill is that, if he whirls his arms like propellers, he can create a draft that can stop a gas cloud from spreading.

Flash also tells us that by vibrating his molecules fast enough he can pass through solid objects and we see him use this to move through a boulder and also through a force field (actually a time barrier.)

It is not clear just how quick he is but in a race around the world against Superman neither can get a head in front, but, although Superman is just as fast, Flash is more knowledgeable about super-speed and more subtle in its use perhaps because it is his only super-power. 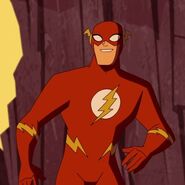 Promotional art.
Add a photo to this gallery
Retrieved from "https://justice-league-action.fandom.com/wiki/Flash?oldid=21645"
Community content is available under CC-BY-SA unless otherwise noted.