A teenage superhero, and member of the Justice League.

Blue Beetle, as he is a teenager, is short and slim with his head and body completely enclosed in a light-blue and black suit. The yellow eyes still blink and squint despite their size. He is inexperienced and over-confident as a superhero which leads him to make frequent mistakes, but can be imaginative in solving problems.

His powers originate from a pack on his back in the rough shape of a beetle that has three pairs of legs that wrap around his body and neck, and large ' horns' that stick up behind his shoulders. It has the same color scheme as his suit and the eyes and tail are lit up.

Blue Beetle addresses it using the syllables "kah-jee" or "kah-jee-dah" to either command it or just converse with it, and it replies with beeps and whistles. It can provide him with the ability to fly by sprouting insect wings and can conveniently create a weapon like a large sword from thin air.

The end of his arm can change into a cylindrical ray blaster, and for extra flying speed a jet thruster can appear on his back. For defense, a rectangular shield can be made for him to crouch behind, or alternatively blades can rotate in each hand that when brought together form a round shield that can resist the blast of Kryptonian heat vision. Blue Beetle's entire suit can also change into something called "anti-grav mode" (it is not clear why) when it becomes heavy and armored to try to resist opposing ray blasts.

In his first story, Blue Beetle accompanies Batman as an intern on a mission to take down Chronos and only on its successful conclusion is he invited by Superman to join the Justice League. 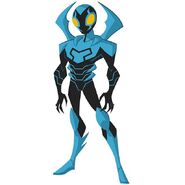 Promotional art.
Add a photo to this gallery
Retrieved from "https://justice-league-action.fandom.com/wiki/Blue_Beetle?oldid=21650"
Community content is available under CC-BY-SA unless otherwise noted.