A female superhero, and a member of the Justice League.

Big Barda is seen as a tall, statuesque woman (she is taller than either Batman or Superman) and wears a tight costume that is colored from top to bottom in alternating yellow and blue parts and has a hint of armor scales on the blue. On her head she wears what appears to be an outsized black helmet with a metal frame that has horn-like extensions and which distinctively obscures the top half of her eyes. A long, wide red cape hangs down her back. The whole outfit gives her the look of a valkyrie from an opera and, with a mature and confident voice, she exudes the attitude of a warrior and likes to keep count of her victories.

Although Barda lives on Earth, she is originally from Apokolips and is the Justice League's expert on that place, and is vigilant in detecting the arrival of hostile parademons from there. She is an athletic and accomplished combatant who has considerable strength, and Batman is happy for her to do the heavy lifting. Barda always carries a club-like weapon (called a 'mega-rod' elsewhere) which she hangs at her left hip. It is used to hit an opponent with great force or send a shockwave through an object.

It can also be used to open a 'boomtube' for travel. Like Wonder Woman, she can use the armor on her forearms to absorb an explosion or the lash of a whip.

Big Barda is the girlfriend of Mister Miracle but does not trust his sincerity, particularly as he has been absent from their relationship for a while. She is, however, protective of him and can also respond to a romantic gesture from him. Barda is also known to Darkseid who can use her as a hostage to pressurise her boyfriend. 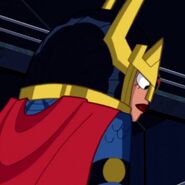 Odd headgear.
Add a photo to this gallery
Retrieved from "https://justice-league-action.fandom.com/wiki/Big_Barda?oldid=22265"
Community content is available under CC-BY-SA unless otherwise noted.