A major superhero, and member of the Justice League.

Batman is one of the main characters in the show and appears in at least three-quarters of the episodes.

He is tall and is one of the heavily built superheroes (along with Superman and Hawkman). His costume is like the traditional one and is a medium gray with a black bat symbol across the chest but this version does not have the dark 'underpants'. A dark blue cowl goes over his head with the eyes shown as a featureless white, and adjoined is a large dark blue cape that goes around the shoulders and, when Batman is standing upright, this hangs down to the ankles and can wrap all the way around his body. At his waist is the Utility Belt which, rather than being the traditional yellow, is a more camouflaged black.

In personality, he is stern and humorless and demands dedication from other League members. In response to his confident, authoritative manner, the other members tend to defer to him as though he is the leader, although we are never told this. It is not clear how old he is but, when we see an earlier version of him, it seems to be many years in the past which would suggest that he is currently middle-aged, although his athleticism suggests he is younger. He speaks with his usual, exceptionally deep voice.

Batman has no super powers but makes up for it with a first-class mind, exceptional agility and combat skills, and a use of weapons, gadgets, and vehicles. He is an excellent detective and is able to use the tech in the Watchtower to locate villains and other threats. Using scientific instruments, he can develop potions to neutralize villains' powers or analyze alien objects. His speed and agility are almost superhuman, and he can survive a pummeling from even super-powered opponents.

In combat, Batman makes use of three different types of weapons that he carries in his utility belt: batarangs, bombs, and bolas. The first two can either cause explosions, give electrocuting shocks, or generate smoke, and sometimes have a light in them to show that they are primed to do something.

The batarang is no longer like a boomerang but spins directly towards its target like a shuriken and can embed its sharp edges in an object. Bolas can also explode but are usually just twirled around before being thrown at an opponent to entangle their body or legs.

Batman can also make use of his rope in combat but usually needs a batarang or bolas attached to the thrown end in order to encircle the body or limbs of a foe. He also needs to use a rope to scale buildings, and this is achieved by using a special gun that shoots a grappling hook accompanied by an electrical discharge.

The rope must uncoil from inside the gun handle and the arms of the hook then deploy outwards to grip the building. The rope is then reeled in, hauling Batman upwards. This device can also be used to grab a small, distant object before reeling it in with the hook arms swung upwards in a pinch.

To travel locally, he can make use of the Batmobile which has its own range of gadgets, and to go faster and further he has the Batplane which is fully armed and can operate from the Watchtower. In two of the short episodes, we see the Batcycle in use.

We only rarely see Batman in his secret identity of billionaire businessman Bruce Wayne.

The 'Bat-Family' hardly features in the show - indeed only Ace the Bat-Hound is actually seen, Robin just mentioned by name, Batgirl only known from show artwork, and Commissioner Gordon perhaps seen in passing. The Batcave is mentioned a number of times but we only see it jokingly used as a backdrop 'screen' in Toyman's mock video game (in Play Date). Batman is friends with his teammates Superman and Wonder Woman, the latter however detests his anti-social personality. 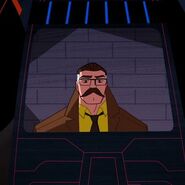 Commissioner Gordon?
Add a photo to this gallery
Retrieved from "https://justice-league-action.fandom.com/wiki/Batman?oldid=21656"
Community content is available under CC-BY-SA unless otherwise noted.