The show concerns the adventures of the superheroes of the Justice League team made popular by DC Comics with the emphasis being on action and humor. The main characters are Batman, Superman, and Wonder Woman, and almost every episode includes at least one of them. The stories normally involve members in a team-up to tackle a menace that they cannot deal with individually, like a threat to the whole world, an alien threat, or a supernatural one, and involving one or more of the show's many villains. Some stories, however, involve a superhero dealing with a more local villain but assisted by other superheroes that just happen to be members of the Justice League. 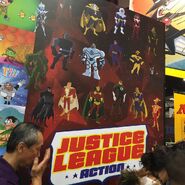